Getty Images / Spencer Platt US stocks slid for second straight day on Tuesday as oil prices continued to whipsaw in the face of a supply glut and lack of storage options. West Texas Intermediate crude contracts expiring in May traded as low as -$16.74 a barrel on Tuesday before settling at $10.01. June contracts… 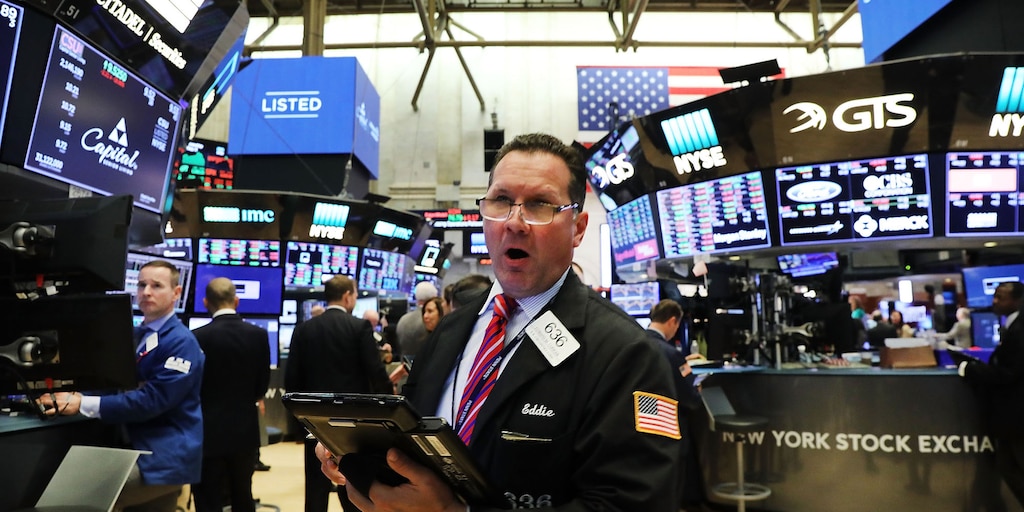 US stocks plummeted on Tuesday amid escalating strain on the oil market.

All three major indexes extended their downturns from Monday’s session as West Texas Intermediate crude contracts expiring in June plunged as much as 68%. Â The commodity market faces unprecedented pressure from a severe lack of storage capacity and weak demand amid the coronavirus pandemic.

Here’s where major US indexes stood at the 4 p.m. ET market close on Tuesday:

Read more: GOLDMAN SACHS: Buy these 21 stocks that are beating their peers by paying down debt amid an unprecedented plunge in cash spending

Popular oil ETF United States Oil Fund tanked as much as 38% amid the commodity rout. The fund’s manager said in a regulatory filing it issued the last of its remaining shares and requested approval from the Securities and Exchange Commission to register an additional 4 billion. The lack of new issuances threatens to decouple the ETF from oil and its price changes.

Read more: A top strategist for JPMorgan’s $2 trillion asset-management arm shares his 4-part strategy for a coronavirus recovery – and breaks down a surprising bond-market bet

“Shippers and storage facility companies looked interesting yesterday and potentially still have room to run in the near term, depending on how long the current supply/demand/storage situation lasts,” Zaccarelli said in an emailed statement. “Energy companies appear to be a falling knife at this point.”

Goldman Sachs sees stabilization taking weeks to arrive. “Shutting down a well is extremely expensive,” Jeff Currie, the firm’s global head of commodities research, said in a Monday CNBC interview, adding that producers are unlikely to react quickly and bring rapid aid to the battered market.

“We don’t think this is the end of it,” Currie said. “You’re likely to see this continue to go on at least through the middle of May.”

Read more: Experts at Boyar Research lay out the Warren Buffett-inspired investing approach that’s helped them crush the market over 7 years – and offer 4 stock picks for a coronavirus-battered market

The energy sector was particularly slammed by the commodity market tumble. The combined market capitalization of S&P 500 energy firms recently dropped to $700 billion, making that corner of the market roughly half the size of Microsoft’s $1.4 trillion market cap, Bespoke Group reported on Monday.

IBM’s first-quarter report added fuel to the stock-market fire. The company announced a 3% decline in year-over-year revenue and pulled its 2020 earnings forecast amid heightened uncertainty. Shares closed down 3.4%.

The back-to-back market slides are a sharp reversal from recent moves. After two straight weekly gains, Monday’s session saw the Dow drop nearly 600 points amid the historic oil slump. Tuesday’s decline is poised to wipe out nearly all gains made in the previous week.

The world’s major central banks bought $1.4 trillion of assets in March – 5 times the last record set after the financial crisis