Spencer Platt/Getty Images US stocks slipped on Thursday after data showed that another 3.8 million Americans filed for unemployment last week. Still, both the Dow Jones industrial average and S&P 500 completed their best months since 1987. Shares of Tesla and Facebook surged in early trading after the companies reported earnings. Tesla later closed lower… 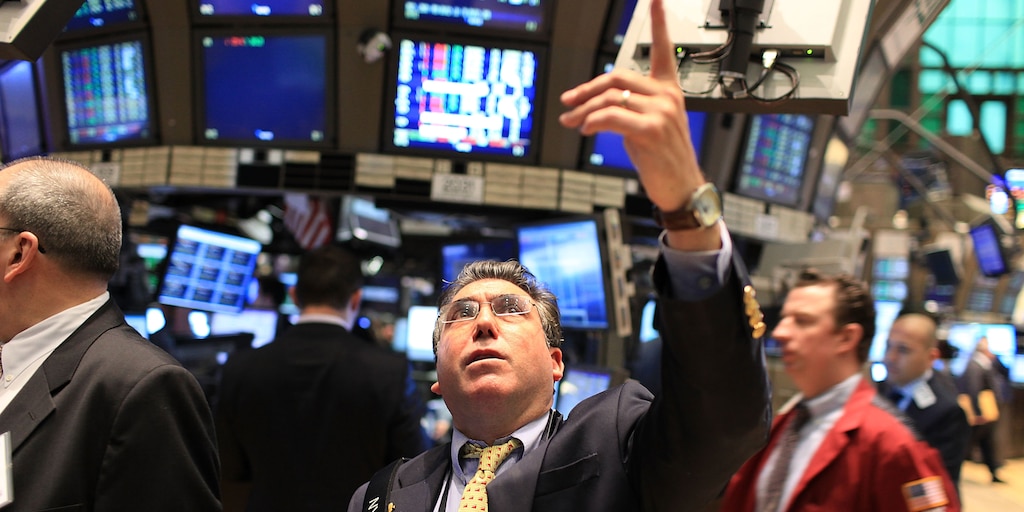 “We may be past the peak of initial claims, but we aren’t out of the woods yet,” Daniel Zhao, a senior economist at Glassdoor, told Business Insider.

Still, both the Dow Jones industrial average and S&P 500 posted their best months since 1987, climbing 12% and 11% in April, respectively.

Here’s where major US indexes stood at the 4 p.m. E.T.  market close on Thursday:

Read more: ‘That’s where the really big upside is’: A CEO overseeing $36 billion pinpoints 7 areas of the market poised to rebound after plummeting as much as 60% this year

The US government also reported on Thursday that consumer spending slumped 7.5% in March, the most on record, as businesses closed and laid off workers. Consumption is roughly 70% of US gross domestic product, making it an important driver of the economy.

On Wednesday, the GDP report showed that the US economy contracted at a 4.8% annualized rate in the first quarter. Economists expect that the worse is to come, forecasting that GDP could fall as much as 40% in the second quarter.

The negative news dialed back some optimism from earlier in the week. Federal Reserve Chairman Jerome Powell said on Wednesday that the central bank was ready to continue to provide stimulus support during the coronavirus pandemic. The central bank also left interest rates unchanged.

The Fed on Thursday said that it would expand its Main Street Lending Program to include mid-sized businesses, but did not say the start date.

Read more: An investing strategy called ‘crisis alpha’ designed to thrive during meltdowns just whiffed on the fastest bear market in history. Here’s how that’s upended a $318 billion industry — and what it means for the future.

In addition, Gilead Sciences on Wednesday announced that it had seen positive results from a critical study of its antiviral drug remdesivir in COVID-19 patients. Later in the day, Dr. Anthony Fauci, the nation’s top expert on infectious diseases, said the early data offered good news.

“Any positive news towards finding a treatment or a vaccine to COVID-19 is driving risk-on behavior,” Hussein Sayed, the chief market strategist at FXTM, told Business Insider. “The other factor feeding appetite to riskier assets is the gradual lifting of lockdowns that we’ve seen in several US states and European countries.”

Investors also still have a close eye on first-quarter earnings season. Shares of Facebook rose 5% Thursday after the company reported solid ad revenue. Tesla shares rose as much as 9% after the company said it managed to turn a profit for the third quarter in a row. Later in the day, the automaker erased those gains and closed lower after famed short-seller David Einhorn again called out its billing practices on Twitter.

Technology stocks have fared well amid the coronavirus pandemic.  The strong gains are leading the Nasdaq higher  — the index may soon trade in positive territory for the year, recovering from the coronavirus-induced rout.

Oil prices gained on early signals of a global demand recovery. West Texas Intermediate crude climbed as much as 29%, to $19.37 per barrel. Brent crude, the international benchmark, rose 14% at intraday highs, to $25.76 per barrel. The gains came even as the International Energy Agency released a report that global energy demand is set for a record slump in 2020, as the shock of the coronavirus pandemic is the worst since World War ll.

Read more: A former software engineer quit a 6-figure job and started investing in real estate full-time. He shares the popular 5-part strategy he’s leveraging and exactly what he looks for in a deal.