Coronavirus Latest: Trump’s Reopening Is Harder Than He Might Think 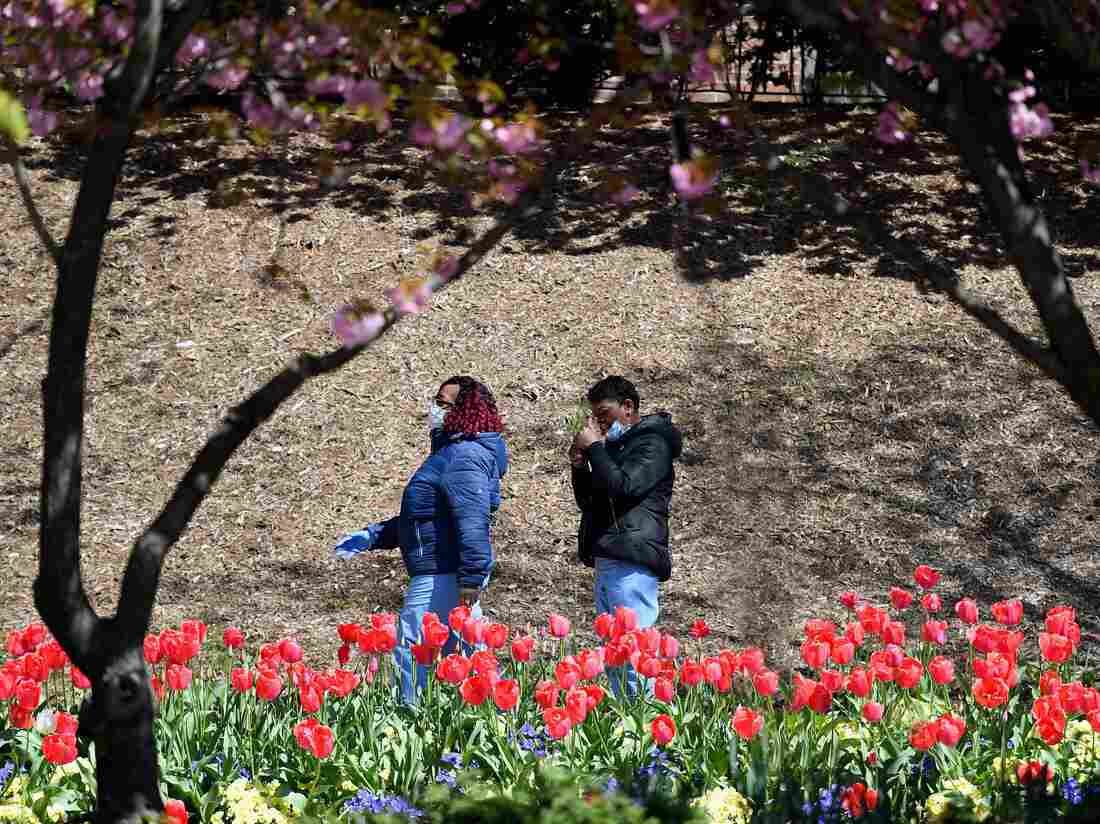 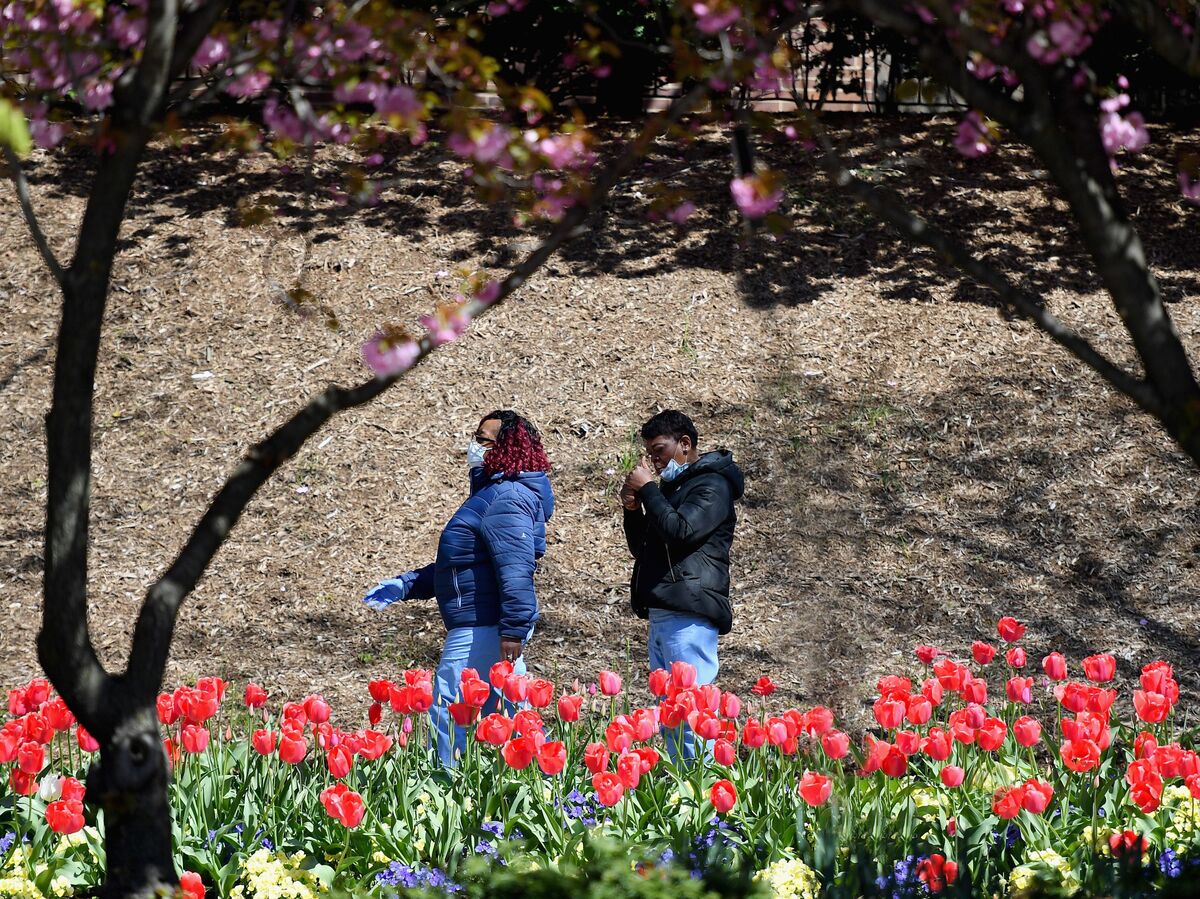 Touting the federal government’s response to the novel coronavirus, President Trump took something of a victory lap on Thursday, laying out guidelines for a phased “reopening” of the country.

Trump boasted during a coronavirus task force briefing that there would be states that could reopen “immediately” — as early as Friday and within a “few days.” After avoiding date targets for most of the briefing, Trump declared at one point, “We’re beating the date. I set a date of May 1.”

The guidelines suggest that states with a 14-day “downward trajectory” of cases can start to reopen by relaxing their levels of social distancing. But the guidance doesn’t address other crucial targets that experts say states need to consider, such as widespread testing.

Despite the campaignlike and hopeful title of the briefing — “Opening up America Again” — there’s still a very long road ahead for the overwhelming majority of the country. Consider that the 20 states, including D.C., with the fewest coronavirus cases make up just 11% of the U.S. population.

States with the most cases and the largest populations will have to act like mini-countries. It’s going to produce a patchwork of plans that could wind up looking pretty similar to the red-blue electoral maps, and there are still lots of questions.

1. How do issues with testing impact governors’ ability to meet the benchmarks laid out in the guidelines?

Testing remains one of the biggest problems with containing the coronavirus and allowing places to move toward recovery. Despite Trump’s boasts, testing is still not widespread in the U.S. Not everyone who wants a test can get one. Only people with symptoms are getting them — and not all of them are — and asymptomatic people are able to spread the disease. That means no one really knows just how widespread the virus is. And without a vaccine or known treatment, there’s the risk of more outbreaks. 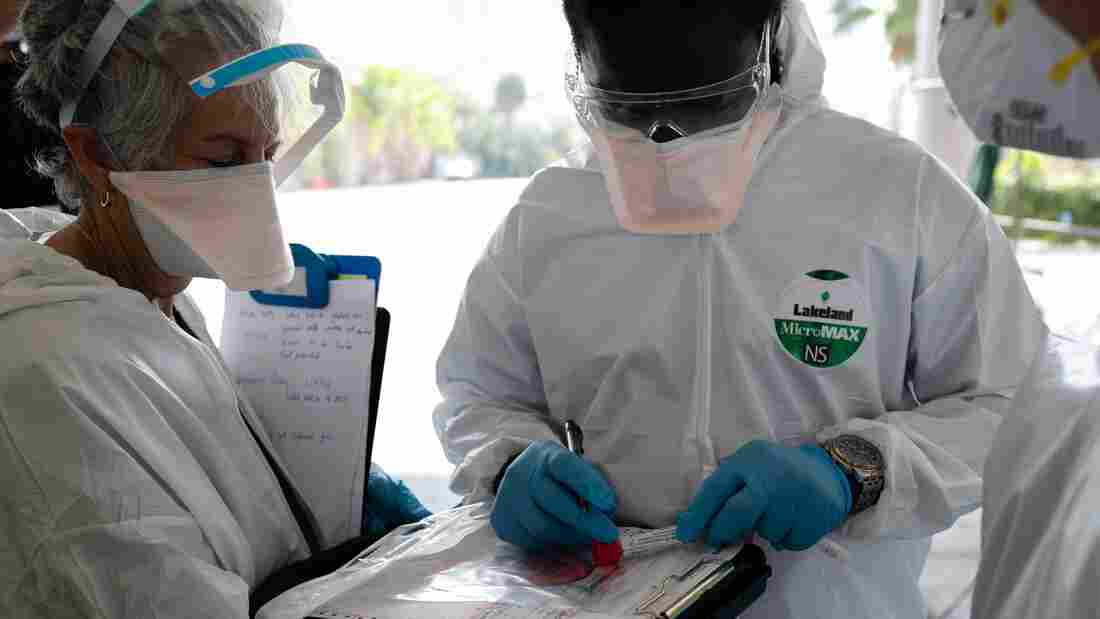 A worker for the Miami-Dade County Homeless Trust after testing a homeless resident for the coronavirus disease Thursday. 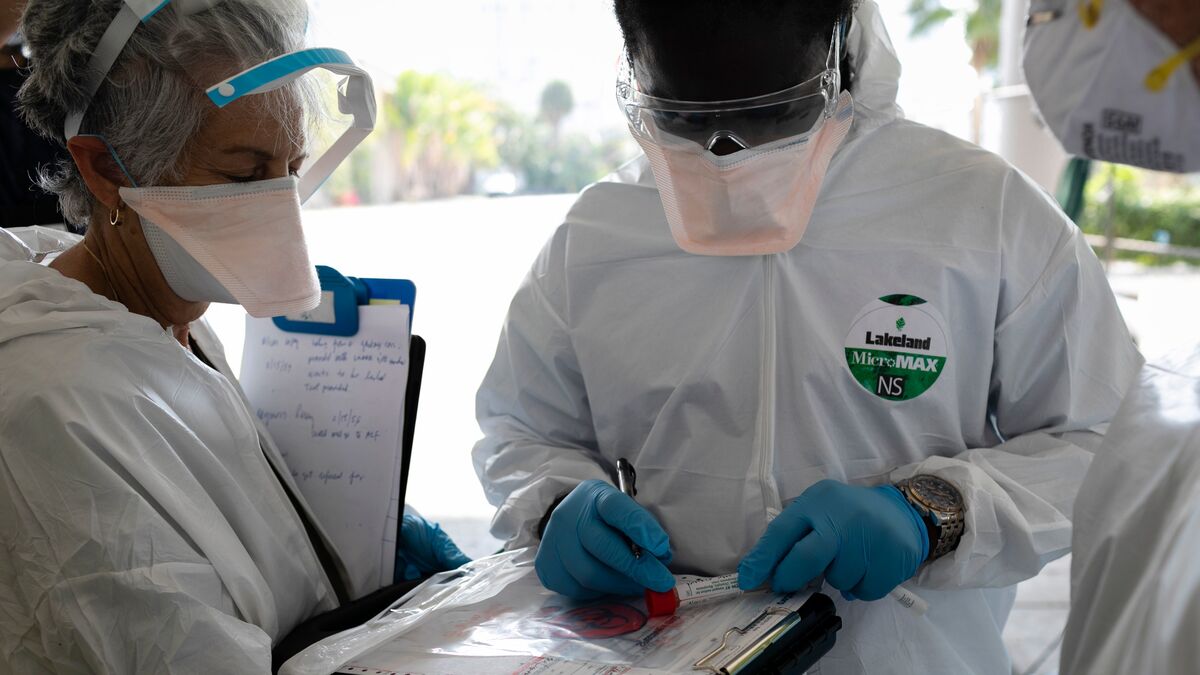 A worker for the Miami-Dade County Homeless Trust after testing a homeless resident for the coronavirus disease Thursday.

2. Will the reopenings give a false sense of security to rural places?

Given the lack of a vaccine — with one at least a year away — a major reason behind stay-at-home orders has been to avoid overwhelming hospitals. There are fewer than 1 million hospital beds in the United States, New York Gov. Andrew Cuomo noted Thursday, and the strain would be felt even harder in underfunded rural hospitals if outbreaks start to happen in those areas.

The guidelines suggest that places that see a re-occurence go back a phase, and Trump said Thursday that if “hot spots” arise, he would “whack” them. But how? Again, there’s no vaccine or proven treatment.

These guidelines will put more of an onus on employers to do these things, and they’re not health professionals. How is that going to work in practice? And does it create liability that a local small business owner can’t afford?

4. How will travel work between states in different phases?

States will likely get to different phases at varying rates. So, how much of a gap will this create between states in different phases? And what about travel between those places? Until there’s a vaccine or a treatment, there’s no way to be sure there won’t be flare-ups or outbreaks that could lead to places with few cases, which may have relaxed restrictions, seeing unnecessary deaths. 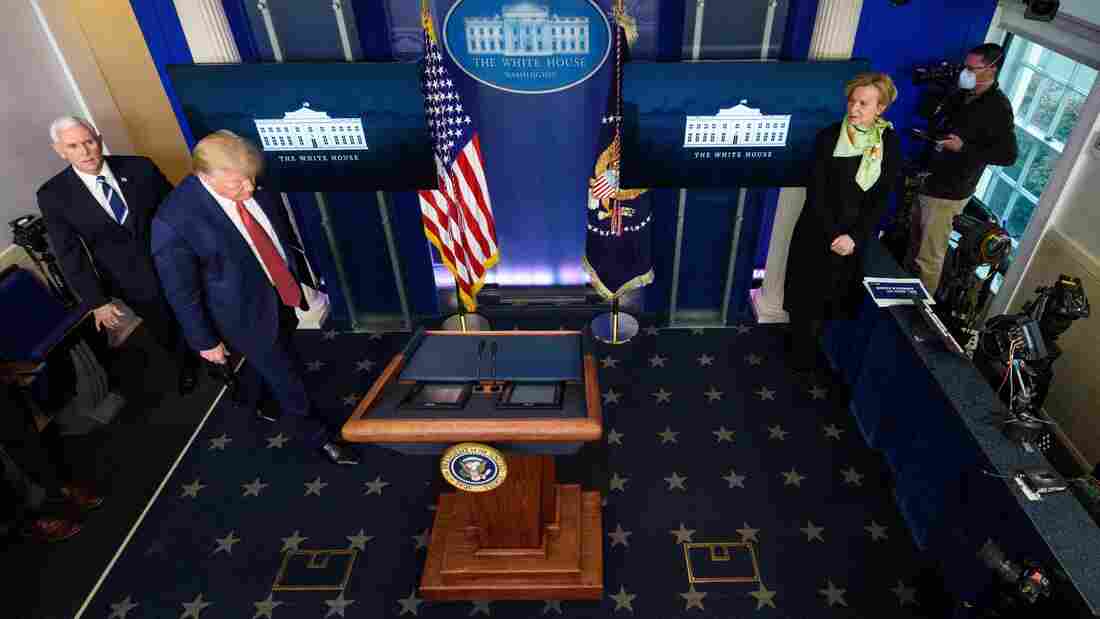 President Trump and members of the coronavirus task force on stage for Thursday’s daily briefing at the White House. 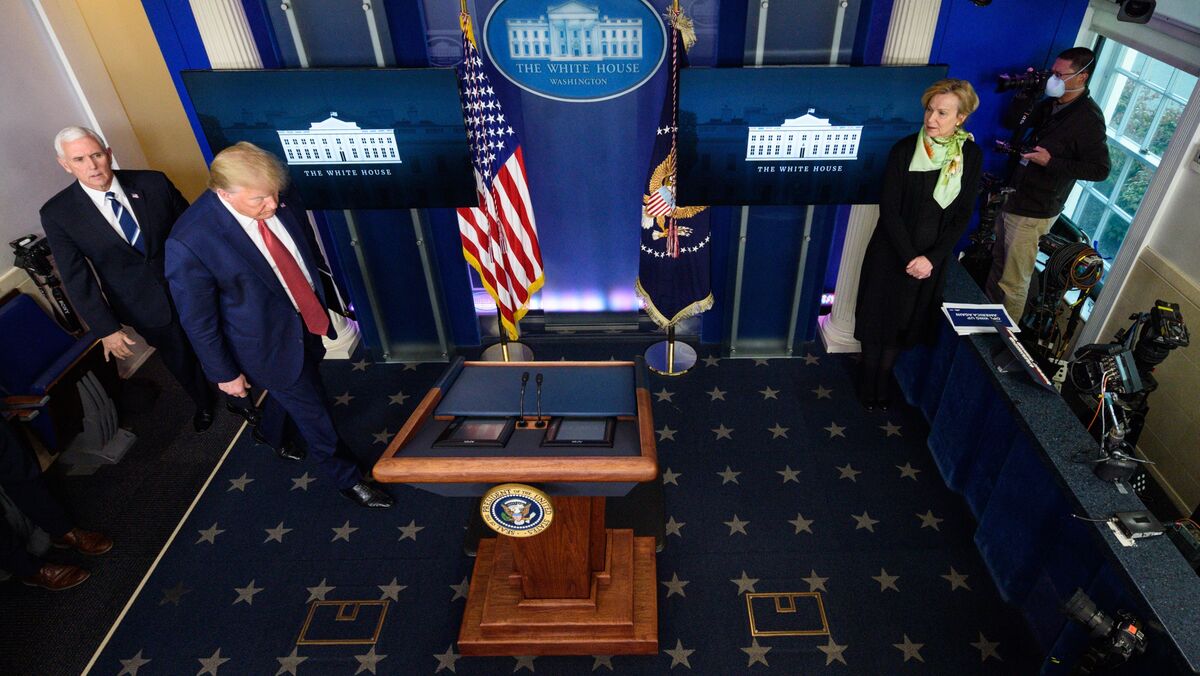 President Trump and members of the coronavirus task force on stage for Thursday’s daily briefing at the White House.

The briefing in brief

In case you missed it, here are other highlights from the White House coronavirus task force’s daily briefing.

1. Trump’s 180 on authority: Trump is doing an about-face with these guidelines, going from falsely claiming he has “total” authority over the states to “reopen” the country to now ceding the way forward to governors. Politically, Trump is setting up a scenario that he hopes is win-win for him — if things go well, he takes the credit; if they go wrong, he blames the governors.

2. Testing still isn’t sufficient: Trump loves comparing the U.S. to South Korea on testing. “We’ve done more than South Korea,” Trump claimed. “South Korea’s done a good job, but we’ve done more.” The U.S. has now tested more Americans when it comes to raw numbers (3.4 million versus 546,000), and it is now on par with South Korea per capita.

But South Korea did its testing much earlier. The U.S. got a late start, leading to a steeper rise in cases, and no matter what the U.S. does from here on out, it can’t change that.

3. More misinformation about what the U.S. knew: Trump continued to claim that the U.S. “should have been told … a lot sooner, and people didn’t want to talk about it. People should have talked about this.” It was. And they did. Plenty of other countries and world health officials were ringing alarms for months as Trump was playing it down.

4. The path to reopening sports: Trump said that at first, sports would likely be participants-only. In other words, just the athletes playing each other in games “made for television.” While it will be odd to see games with no fans, TV is where the money’s at. Trump then noted that fans may be reintegrated separated by two seats, for example, before getting back to packed arenas.

5. Mixed message to protesters: Asked whether protesters who are against strict stay-at-home measures should listen to local officials, Trump didn’t say they should and did not criticize them. Instead, he noted that this has been a “tough process for these people” and that “they want to get back.”

That kind of message completely undermines local authority and could only stand to encourage more of these kinds of protests and usurping of orders from governors — when people disagree politically with the authorities.

Quote of the briefing

— President Trump, on the country’s likely patchwork path to reopening 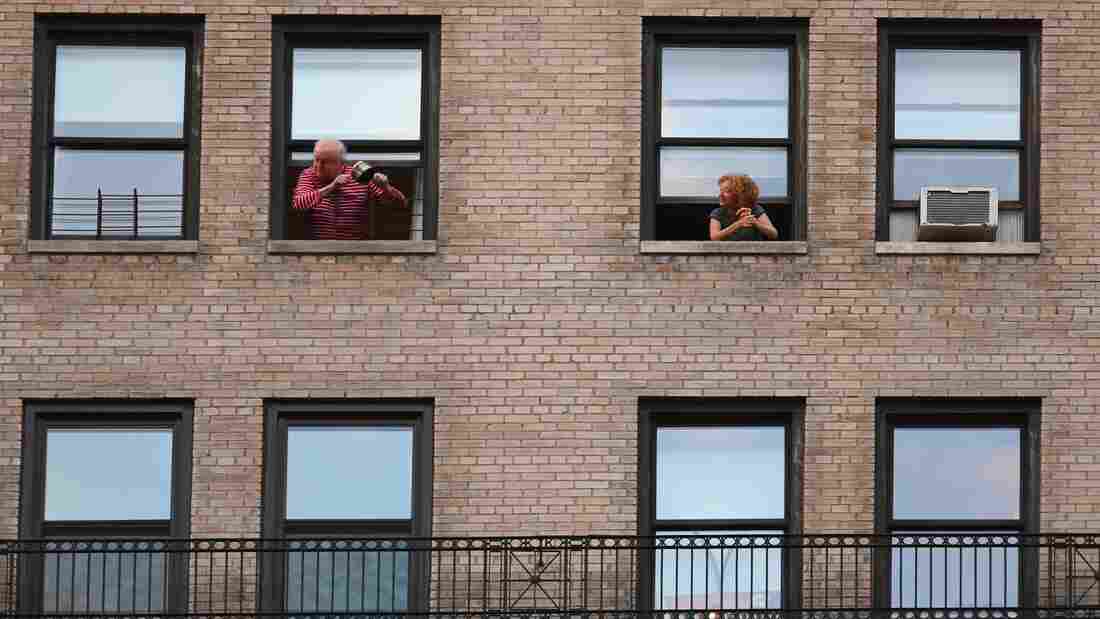 People applaud and cheer out of their windows to show their gratitude to medical staff and essential workers Thursday evening in New York City. 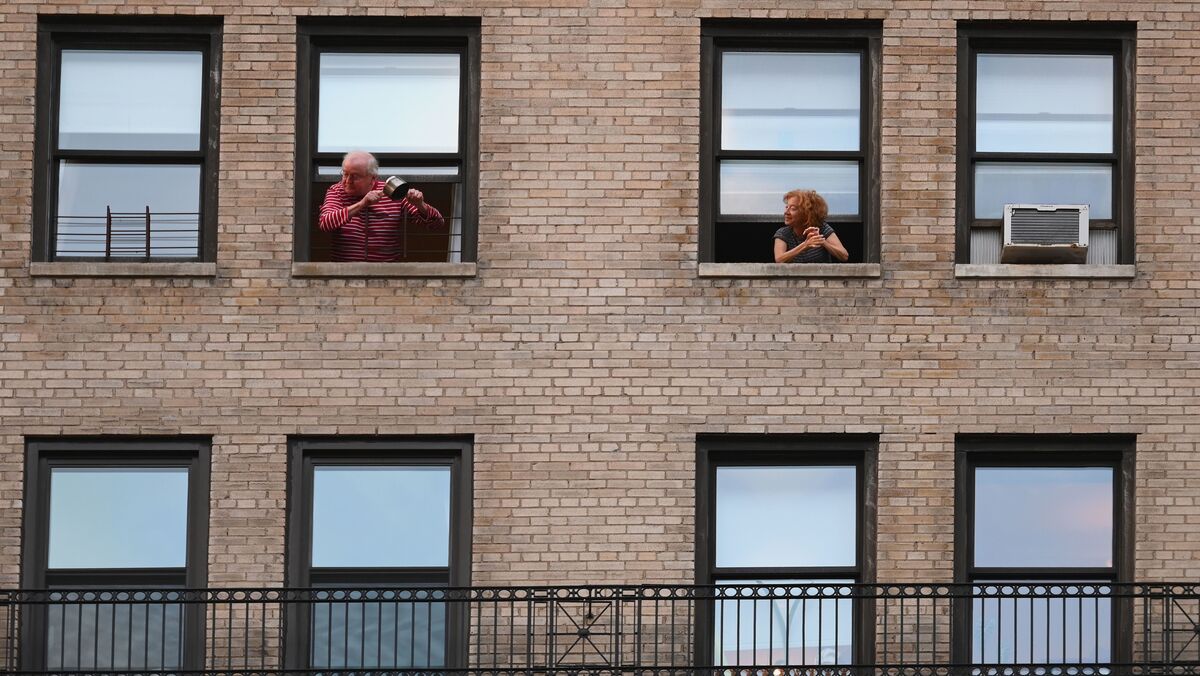 People applaud and cheer out of their windows to show their gratitude to medical staff and essential workers Thursday evening in New York City.

What’s It Going To Take To End The Shutdown? 5 Keys To Containing Coronavirus: There are several steps the country has to take to reopen, as NPR reported Thursday:

The virus has put a crippling strain on the nation’s hospitals, and facilities are still largely unprepared for additional spikes in coronavirus patients. Already, supply shortages have ravaged many hospitals.

On average, one model suggests that hospitals will need to double their intensive care unit and ventilator capacity to care for the most critically ill COVID-19 patients. Experts say that better systems to separate and isolate known and suspected coronavirus cases will also be critical to containing the virus.

Long Before COVID-19, Dr. Anthony Fauci ‘Changed Medicine In America Forever’: The White House’s top immunologist on the coronavirus task force has a long, storied history in the medical field.

San Francisco Ramps Up Back-To-Basics Contact Tracing To Stop COVID-19: The first city in the country to implement a stay-at-home order in the coronavirus pandemic now hopes to test all residents who may have come in contact with the virus and persuade them to self-quarantine for 14 days.

After 7 Months In Space, Meir Will Return To A Very Different World: If you haven’t been affected by the coronavirus, you must have been in outer space or something. For astronaut Jessica Meir, that’s exactly the case. She’ll return to planet Earth on Friday after seven months in space, coming home to a starkly different reality.