REUTERS/StringerChina’s manufacturing purchasing managers index fell to 35.7 in February, the lowest since the survey began in 2004, according to data released by the National Bureau of Statistics on Saturday. The dismal number comes amid the coronavirus outbreak, which has slowed economic activity in China and disrupted supply chains.  Now, the entire world is on… 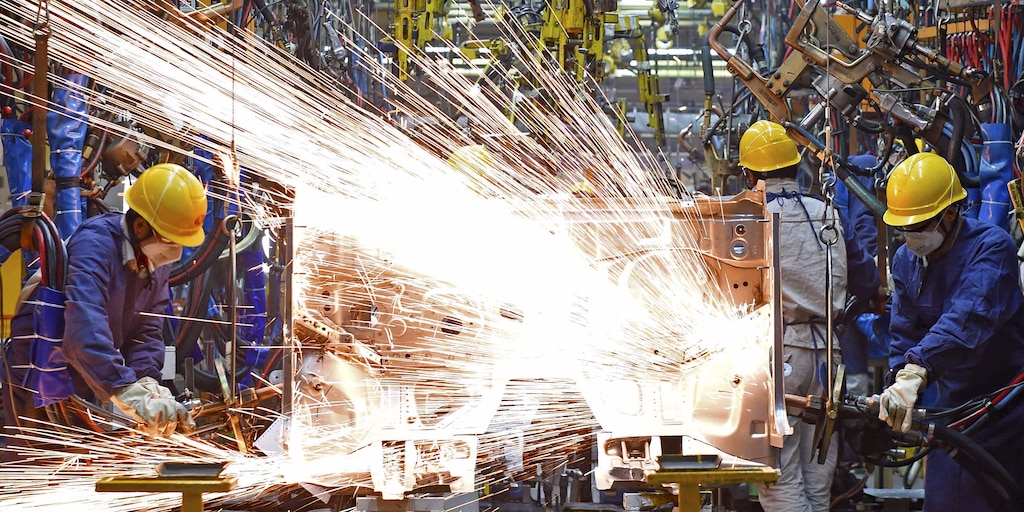 China’s factories had a rough month due to the coronavirus outbreak, and now the entire world is bracing for further pain.

China’s manufacturing purchasing managers index fell to 35.7 in February from 50 in January, according to data released by the National Bureau of Statistics on Saturday. It’s the lowest reading on record for the indicator since the survey began in 2004. China’s non-manufacturing gauge also fell to 29.6, its lowest ever. Any reading below 50 signals a contraction.

The dismal reading comes amid the coronavirus outbreak, which originated in Wuhan, China. The slump in economic activity was driven by virus control measures implemented by the Chinese government, including quarantines, travel restrictions, and factory shutdowns.

In addition, production, new orders, and staffing levels all plummeted at the fastest rates on record in February, while supply chains and delivery times took a hit, CNN reported, citing Caixin Media group.

Fears that the outbreak will hinder global growth have sparked panic in global markets, which are poised for an eighth straight day of losses Monday after tumbling into correction territory in February. As investors rushed to safe-haven assets, yields on the 10-year and 30-year US Treasury bonds fell to record lows.

There could be further pain ahead. Even though some factories in China are now running again, they may not be working to full capacity, according to Bloomberg.

The spread of the virus around the world has sparked fears that other economies could be hit as well  — while the majority of the 3,000 deaths and 89,000 people infected are in China, the virus has also appeared in more than 60 countries including Italy, Iran, and the US.

On Monday, the Organization for Economic Cooperation and Development said that the virus has put the world economy in its most “precarious position” since the 2008 financial crisis.

The organization also forecast a sharp slowdown in  global growth in early 2020 to 2.4% from 3% in November due to the coronavirus epidemic. But, in a scenario where the epidemic breaks out in other countries, “the slowdown will be sharper and more prolonged,” and global GDP could fall to as low as 1.5% this year, according to the OECD.

“Containment measures and fear of infection would hit production as well as spending hard and drive many of the epidemic affected countries into outright recession,” Boone wrote.

The world economy was already weakened by persistent trade and political tensions, and is now “too fragile for governments to gamble on an automatic sharp bounce-back,” said Boone.

Beyond containing the epidemic and limiting cases of serious illness, the priority should be “allowing short-time working schemes and providing vulnerable households temporary direct transfers to tide them over loss of income from work shutdowns and layoffs,” according to the note.

In addition, coordinated fiscal and monetary support by countries would compound the effects of policies, Boone said, and would help reverse depressed confidence levels.